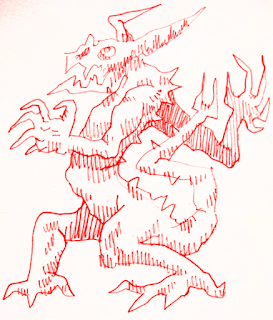 MOLDHAMMER
This game strives to serve the same functions as old-school D&D with a minimum of rules to reference. All players begin with two Hearts and 10 To-Hit, so character creation is almost instantaneous. Levels are gained by looting Treasures and cashing them in at Guild Halls, so characters are defined by decisions made during play and not preparation. Fighters get improved combat stats (matching the HD and THAC0 progression found in AD&D) and can perform creative combat maneuvers more easily than other classes. Thieves get improved stealth skills and master an individual skill at each level, but are written carefully to avoid siphoning aptitude away from other classes. Wizards simply get a new spell every level - a small list of levelless spells is provided.

Influences
I couldn't have made this without Necrotic Gnome's excellent reorganization of B/X D&D. I wouldn't prefer to run it, but it's a hell of a lot better compiled than Gygax's versions of the game. Certain ideas were lifted from Dungeon Crawl Classics - level 0 starting characters without a class, and the Fighter's improved ability to perform special dueling feats. Armor is changed from a To-Hit modifier to its own separate roll, like in Warhammer Fantasy Battles. The change from HD/HP to Hearts is an effort to simplify combat damage while maintaining some OSR compatibility. Hearts also take some inspiration from WHFB's Wounds, as a direct indicator of how many solid hits are needed to take a combatant down. Hexcrawl rules were mostly borrowed from Type1Ninja's MoonHop hack. The name "MoldHammer" is a mashup of Moldvay and WarHammer.

Out of the Odd & Into the Fire
Games aren't just systems, they're also toys! Game mechanics can be effective or efficient but still not scratch a certain tactile itch during play. For a few years I've primarily made hacks of Into the Odd, which is a great game. However, recently I've moved away from some of its tenets. Despite Into the Odd's mechanics working tremendously, I just wanted different buttons to press. Initially, I removed Strength damage, so there would only be one health bar to track for each unit. HP into Strength damage works, but it just felt weird! However, Into the Odd is a finely tuned machine. Not taking Strength damage greatly improves your chance to withstand damage at 0 HP, so combatants quickly dropped to 0 HP and then had no reason to roll damage for a solid half of combat, since you just rolled vs. death or KO with no change to the stat. Oops. So I lowered the stats and raised HP. This actually worked fairly well! But I got another itch - how about removing HP? We're left with DoomHammer in its current state, where you save to attack, and targets save vs. wound, taking two or three before collapsing. It's alright, but it's not good enough. Furthermore, it barely resembles Into the Odd anymore! And so, I decided to start again from the source. Into the Odd is based on OD&D, so I loaded up some .PDFs from the 70s, flipped open my copy of AD&D and got to writing MoldHammer, my very own derivative retro-heartbreaker.

Beyond MoldHammer
This was fun to put together. I've tested a variety of different fights, and they always played out pretty entertainingly for how bare the system is. Larger groups with more Hearts, To-Hit and Armor won very reliably, but there always seemed to be a few moments where a lucky weaker party could turn the tide, especially if they were players trying combat tricks and thinking tactically. THAT BEING SAID - I definitely couldn't just run this system on its own for more than one or two sessions. I don't necessarily want to add ability scores, but there could be more tools for making rulings. In situations outside of these provided rules, I expect the GM to assign a To-Hit roll or X in 6 chances based on their judgement. I'm thinking of implementing more X in 6 skills like in Troika, or maybe numberless attribute tags like Mighty or Baleful. The system is missing explicit rules for hirelings, hex-clearing and fortress building, though I tried to imply those two first features. It's missing rules for torches and lanterns. I want to add tables for starting equipment and background details. I want to spice up wizardry. I want piles of distinct special weapons. Basically, the next incarnation of this game begs for more flavor and playable content.
Posted by rattlemayne